“To draw does not mean simply to reproduce contours; drawing does not consist merely of line: drawing is also expression, the inner form, the plane, and modeling. 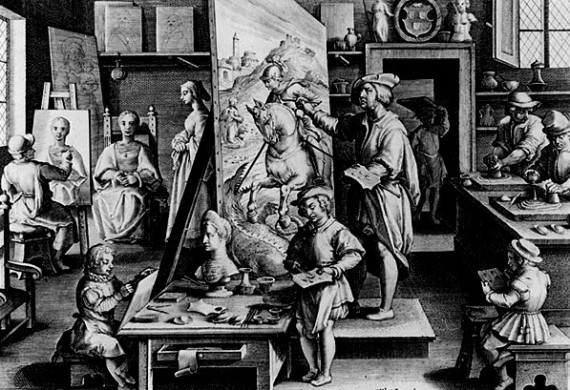 From the earliest days of oil painting to the time of this writing (late Twentieth Century, into the early Twenty-first), a number of oil painting techniques have evolved. A great deal has been learned through the processes of trial and error and from the experiments of various artists through the centuries. From Jan and Hubert Van Eyck, possibly the first innovators to paint pictures in oils, in the late Fourteenth and early Fifteenth Century, to William Bouguereau, Jean Léon Gérôme, Alexandre Cabanel, Jehan-Georges Vibert, and the other French Academic painters in the late Nineteenth Century, technical knowledge developed more or less continuously, as artists of each generation added their discoveries to what their predecessors had learned.
The continuity was interrupted around the end of the Nineteenth Century as a result of the popularity of the Impressionists, who were viewed as a rebellion against the academic style of painting. The emotional reaction to the Impressionists' emergence resulted in a total rejection of the Academy and all it stood for, to the detriment of art instruction throughout the Twentieth Century. The techniques taught at the Academy and the ateliers of the Academics represented the culmination of at least five hundred years of more or less continuous development in representational drawing and painting, dating back to the early Renaissance. This wealth of knowledge included many of the discoveries of the Old Masters, yet it was suddenly regarded as "old fashioned," “passé,” etc., and therefore of no further interest. Technical development essentially ceased at that point. Fortunately, a few of the dedicated students of Academics carried on in obscurity and passed what they had been taught on to their students.
There was also enough written documentation of the older techniques to enable this author, and a few other similarly obsessed individuals, to gain some understanding of what was involved, undaunted by the best efforts of several universities' art departments to discourage the pursuit of this knowledge. These written clues made possible a more thorough reading of the paintings themselves sought out in museums across Europe and the United States over many years. Conservation scientists have also been able to provide a considerable amount of extremely valuable information previously only guessed at, which has helped to unravel the mysteries of the past, as technological advances and ongoing scientific inquiry continue to provide an ever-sounder base of knowledge from which to operate. Only after considerable practice in painting can one fully understand what is there to be read in the paintings of the Great Masters and in the books which attempt to explain the techniques.